In 1980 when this article was first published, I was a clueless kid. But republished in 2010, with Mountain Phoenix grown into a big girl, she heeded the author’s recommendation and took a close look at this picture that makes Jamyang Norbu’s stomach churn. 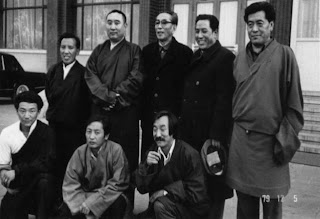 Strange how people can tick differently about one and the same thing: Because what I feel is not revulsion at all, it’s nostalgia! - Isn’t that strange?

I can assure you it’s not because of Ngabo. I had to look really close to even detect him in the group. Instead, my attention went straight to the late Panchen Lama because he was our bridge to the other side. Since his passing, no leader has been able to fill the void. Those were also the times when – unlike now - both sides were at least talking, leaving political allegiances aside. That’s what made me nostalgic.

Who cares about Ngabo?

He didn’t do anything positive worth remembering. His first and foremost concern was his own survival, without having to do much for it. Already back in the old days, it had been the prerogative of people with his class background to hold high office without doing much. All the guy did was making sure that didn’t change after he switched sides, so what’s the big deal?

That spineless submissiveness that incenses Jamyang Norbu in the article, is symptomatic of our political culture even to this day. He says it himself. So over what exactly should our stomachs churn?

Sure, we can always argue that Ngabo overdid it. But hey, the way I see it, the guy only sticks out because of historical circumstances and the role that fell to him: Bad luck that, he of all people, got the job in Kham where the Chinese happened to show up first.

Now Dharamsala’s eulogy is absurd, no issues with that. It makes Ngabo bigger than he ever was in real life. But Jamyang Norbu then goes on to make him even bigger, by digging out an article that was thrown at us thirty years ago – with the rest of us padding him on the shoulder over how well he’s taught Dharamsala a lesson.

Folks, we know so well that in our political culture, holding a high post still doesn’t mean anything of substance, such as having a vision or an agenda. So how come we expect a Ngabo to exhibit backbone? Give the guy a break. He’s dead! - Deconstructing Ngabo is a real no-brainer.

Instead of wasting time deconstructing someone so weak and vulnerable, we’d better be constructive checking out those leaders from whom we can expect to learn something, so we can move forward in the political discussion.

In this context, Bapa Phuntsog Wangyal deserves a second look because commoners never ran the show in the old days. That used to be the stage reserved for religious leaders and aristocrats.

Phuntsog Wangyal came from a farmer's background in some faraway corner at the end of Tibet, nothing exceptional. What distinguishes him from the crowd though, is that he followed what went on in the world around him, and became convinced that Tibet, too, needed to change. He saw back then that our political system was unfit to tackle the problems of the modern world. Most notably, the man was not just ideas. He let actions follow.

He went to Lhasa to test the water for a Tibetan communist movement, because for him Communism was the answer for a modern, egalitarian Tibet. He tried to convince people in the government that our political system was outdated, and we needed to do something about it.

When he fell on deaf ears in Lhasa, he could have walked away from it all. But the guy persisted and started to look outside, first trying the Soviets to help set up a Tibetan communist movement, and only when that failed, did he turn to the Chinese.

Let’s forget about the act of treason for one second. Just reflect on this guy from out of nowhere deciding to go to the capital believing he could change the Tibetan political system. - Tibet was a class society with a government enamored in its own world. For a regular guy to do that, it took not only farsightedness and courage, it took tons of self-confidence.

That’s the remarkable feature about Phuntsog Wangyal, an average Tibetan like you and me: He didn’t just sit there waiting for our Lamas or the Tibetan government to sort things out. He took matters into his own hands. He didn’t just call out for political change, he actively made change happen.

Yes, he ended up in the wrong camp; and yes, his venture failed completely. He is the big time loser out of the three collaborators. In the end, even the Chinese didn’t trust him because to them, he was more a Tibetan nationalist than a loyal communist. They threw him into prison for 18 years. After he reemerged, they still wouldn’t give him a post of any significance.

In retrospect, his biggest failing was his naïveté in believing the Chinese communists would help develop Tibet and then withdraw. But even there: Nobody could foresee how Chinese communism would unfold in practice. The movement was young in China to say the least.

So my bottom line is: Even though he stands on the other side with different ideas, we folks today can take a leaf from his book as far as audacity is concerned. Especially at this time, with the talks going nowhere and an awkward Kalon Tripa search, we desperately need leaders who can inspire and are bold enough to follow through.

Jamyang Norbu’s bottom-line is: “Yeah, whatever you apologetics say, but there is a limit and who ever passes it, is a traitor. Full stop.”

I would wish an opinion leader like Jamyang Norbu would move the discussion forward and go beyond bashing weaklings or questioning people’s patriotism.

It’s desperate enough as it is. Our Mission Impossible envoys have just returned with empty hands from another humiliating round, and it’s plain to see that we’re back to square one. More “deconstruction” will only make sure we’ll stay there, so let's avoid it like the plague!


All written content on this blog is coyprighted. Please do not repost entire essays on your websites without seeking my prior written consent.
Posted by Mountain Phoenix at 9:46 AM