Greetings From The Animal Realm 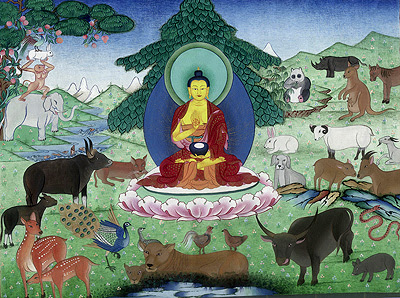 Om Mani Padme Hum! My neighbour's cat died yesterday. Mikey was shy, seemingly indifferent and like most indoor-only cats he was fat because all he did was eat,  sleep and hide under the sofa. I'm not too fond of cats but a few times when his owner was out of town, I would refill Mikey's food and water bowls and clean his litter-box. So there was something like a personal connection and I was a bit sad when I heard he was no more.

Immediately I had to think of what we would do when our dog dies. He is getting old for a dog his size. He doesn't see so well anymore. The vet said he´d need a routine surgery to improve his vision. And although my mom insists he is just acting lazy, I suspect he doesn't hear so well anymore either because when we call him, he often doesn't react.

We owe this four-legged friend who has been with us since he was an eight-week old puppy. Were it not for him, we would never be as active as we are as a family today. Through rain or snow, nothing keeps us from doing our walks three times a day, every single day we have lived with him. And due to him, our kids have always loved the outdoors. When they were barely two, they could easily do a steep two-hour hike up the hill without any fuss, which amazed even our hardy farmer relatives in Tibet during the kids' frequent visits as toddlers – all thanks to our dog, their perfect walking companion.

Recently, the Lama talked about the Six Realms into which one could be reborn and that the human realm was considered the most fortunate because only as humans could one actively work towards attaining Buddhahood and have the best chance of breaking the Samsaric cycle. In order to motivate us to diligently practice Dharma, he pointed out the rare opportunity humans have and contrasted that to the situation of animals. That it would be easy to fall into the lower realms at any point, so we should practice as long as we had the opportunity.

Animals have a very poor chance even for achieving a better rebirth let alone attaining Buddhahood, the Lama continued. Dogs, he illustrated as an example, spend most of their day sleeping; their lives are driven by instincts and the chance to work on themselves and improve their lot was very limited. The only chance animals have for a better rebirth, the Lama pointed out, was through coming into contact with the Dharma.

He then cited the funny story of a fly resting on a dry cow pat when it was flushed three times around a Stupa by heavy rain and as a consequence of the involuntary circumambulation, the fly could improve on its rebirth and came back as a human.

At another occasion the Lama recounted a story about the Indian Buddhist saint Vasubandhu and a pigeon that had its nest right above his window. Hearing him recite Mantras and prayers each day was enough for the bird to eventually be reborn as a human who later went on to become one of Vasubandhu's disciples :--)

After I heard the Lama recount these animal tales, I began letting my dog sit with me in the prayer room in the mornings and started taking him along on occasional Kora in the hope that the circumambulations have a positive imprint on his mental continuum so he could be reborn as a human. I can't believe I'm doing this. I feel a bit like one of those Lhasan Polas you can see on the Lingkor with some sheep on the leash liberated from the butcher and now faithfully sauntering along behind them.

There were also these elderly Inji ladies who would bring their lap dogs into the temple during teachings. First I was put off by them. No decent Tibetan would ever bring something as dirty as an animal into a Lhakhang! That was just too unhygienic and disrespectful. But my view changed, as I began to understand the motivation of these ladies: All they were trying to do was give their pet a chance to "absorb" some Dharma for a better rebirth. So not only did I become more tolerant, but I too began bringing my dog into the temple even though he was bigger than those cute little Apsos and Spaniels one could tuck away into a handbag!

Alas, we must have overdone it with our love of animals: one day the temple care-taker put up a "no dogs allowed" sign at the entrance.

Some of my Tibetan friends say dogs here have a better life than many a poor person in Tibet. They say it in a way that you almost get the impression dogs shouldn't receive all this attention. They are amused to learn that dogs here have ID cards, get annual medical check-ups, vaccines and if necessary also surgery. But it's not the fault of "privileged dogs" when some humans seem to have tougher lives than them. What to do? It's all karmic after all, is it not? Rather than resent the "injustice", better move on and do something positive to improve one's future Karma.

When I look at my dog's merit account it really appears in good shape: He hasn't hurt anyone, doesn't lie nor cheat. He doesn't bite or act violent. Unlike some of those little capricious house dogs I've come across in Tibetan homes in India and Nepal, he is not a loose cannon better locked away every time visitors arrive. He gives my family so much affection. He is always the first to greet me enthusiastically when I come home from work in the evenings. Even with regard to food he is detached which is rare for dogs bred in the West.

In Tibet I saw dogs which are completely in control of their food instinct. On Losar day for example, my cousin would feed his huge Tibetan mastiff guarding the house by placing three lumps the size of tennis balls on a plate in front of the dog: One lump is Pak made of Tsampa, one is made of rice and the third made of meat. A good dog, my cousin taught me, would first eat the Pak, then the rice and only then the meat, which is exactly what his dog did.

Most dogs bred in the West that I've seen would eat anything put before them and as much as you gave them and still beg for more. But our dog has never had this obsession with food. He only eats when hungry and only as much as he feels like. Even if you gave him sausage which is his favourite, he would walk away after a few bites. Sometimes there are entire days when he goes without food. He then only drinks a little water.  It's almost like he is fasting.

When I think about it, from a Buddhist point of view he is really trying the best he can as a dog. And in terms of managing food cravings, he is definitely more advanced than some of his human housemates. Actually his merit account looks in better shape than my own.

Sometimes I see the children whisper Om Mani Padme Hum into our dog's ear. Hopefully the Mantra of the Compassion Buddha sticks. Not only has our dog helped the children to become sturdy walkers, in a way he is also helping them to train their capacity of consideration and thoughtfulness. As much as they are bringing Dharma to the dog, the dog too in his capacity is giving back Dharma to the children. They are very gentle around the dog, never shout, let alone hit him.

It is said that Buddhas and Bodhisattvas take deliberate birth in the animal realm to benefit these creatures. They take birth in any of the Six Realms for that matter as long as it helps beings. There are also many stories about previous lives of the historical Buddha before he reached Buddhahood in which he took birth as an animal. These so-called Jataka Tales make for great goodnight stories for your children.

One such tale particularly popular among the Tibetans is "The Four Harmonious Friends". It's frequently depicted in Tibetan art such as monastery murals. The essence of the story is to illustrate the importance of acknowledging our interdependence and the value of peaceful cooperation and friendship in order to live harmoniously.

Buddha was the bird, his two disciples Shariputra and Maudgalyana were the rabbit and the monkey respectively and the Buddha’s cousin, Ananda, was the elephant.  Thanks to their good example, peace and harmony spread among all animals in the forest. Even the humans living near-by benefitted from the positive Karma the animals created and they cherished them and made food offerings to them as a token of their gratitude.

When our dog dies I would like to request the monks to do prayers for a good rebirth. I don't know whether that's a Tibetan custom. Perhaps the monks will think it's exaggerated and extravagant to pray for a dog. But then we include sems can thams jad in our prayers and dogs clearly qualify as a part of "all sentient beings", why should we not request the monks to say prayers for a dog?

I would like to have his remains cremated and hope to take the ashes to Tibet. It would be nice to release it together with my children on the same mountain facing the monastery where my dad's ashes were spread. After all, our dog comes from a line that was originally bred in Tibet. If his final resting place can be where his ancestors came from and facing a monastery, maybe his chances for a better rebirth increase further.

As a child, I always wanted to own a dog. It wasn't possible because both my parents were working. So he is my childhood dream come true. People often say their dog is like a family member. I definitely feel related to him. When I take him for a walk, strangers occasionally stop to comment on how beautiful our dog is and then they inquire about the breed. I would jokingly say, "He is the same breed as his owner - Tibetan."

With another Sakadawa around the corner it's the perfect time to remember the kindness of animals. They are helpless while we exploit them as sloggers, kill them for our food and make fancy apparel out of their skin. They cannot protest either when we keep them for our entertainment as pets or stare at them locked up in cages in a zoo and have them do stunts for our pleasure as circus animals. But as Buddhists we are taught that all beings including animals have been our loving mothers and fathers countless times. We can try our best not to unnecessarily harm them.

Have a great, memorable Sakadawa! 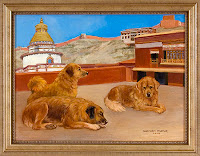 Related Essays
Happy Sakadawa!
Posted by Mountain Phoenix at 2:27 AM