It’s the beginning of Sakadawa, the most important Buddhist holiday. People commemorate the birth, enlightenment and passing of Shakyamuni Buddha.

Many lay folks intensify their spiritual practice during the Tibetan Vesak by following special rules to complement their regular Dharma routine.

The most visible Sakadawa practice for the lay is to refrain from eating meat in order to minimise the accumulation of negative Karma by harming other beings. It’s commonly believed that spiritual merit accumulated during this special month multiplies manifold. If it’s meant as an incentive to step up the practice, it seems to work.

What I like best about Sakadawa is that it gives you choices. So if you think it’s overkill to observe it for the whole month, you can simply do it for a single day - ideally on Tsepa 15, the day of the full moon which falls on 27 May this year. And if you can’t live off a single meal for that one day, then at least make sure you avoid meat. - You can almost custom-build your Sakadawa, ain’t that beautiful?

But I didn’t always look at Sakadawa this way.

In fact, I didn’t pay attention at all, ever. When I accidentally learned that we were in the middle of Sakadawa, the only thoughts that would go through my head would be: If you eat animals year-in and out, what good is it to put on a saintly show for just a month or a lousy day? You seriously believe that would make a difference? Only old illiterate folks fall for that!

I just couldn’t get my head around it until many, many years later.

During Q&A following a teaching on “Atisha’s Lamp on the Path”, one person remarked that it was so incredibly difficult to generate compassion towards all beings by reminding yourself that they have been your loving mother in countless previous lives.

The Lama’s response was: “Go step by step. Do today what you think you are able to do today, and pray that one day, you will be able to do what you are unable to do now.”

I don’t know what that person made of the comment, but it struck a chord with me. Maybe because the authority to decide was left with the individual and there was zero pressure. Lamas are so cool sometimes.

I asked myself what I could do without much effort. Then suddenly I had the idea: I could go vegetarian. The least I could do right then and there, was stop harming “mother sentient beings” by eating them. If you love meat, everyone will understand why you can’t be a vegetarian. But if you’re not particularly fond of it, like myself, and still aren’t a vegetarian, now that’s unforgivable: It’s eating animals out of indifference, out of plain thoughtlessness. So what may have looked like a great act, was actually nothing, and should have suggested itself long ago. 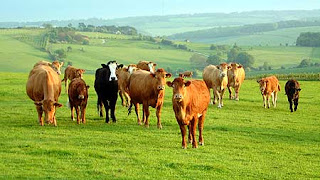 I owe the Lama and the person who made that mother-sentient-being comment. And want to know the funny part? It’s how one thing is leading to the next. Remember the Lama said "go step by step"?¨

After having gone vegetarian for well over a year, I now I find myself thinking that I could equally easily do away with other stuff around me that’s made from killing animals, such as shoes, handbags, jackets, belts, pants. I still use whatever leather stuff I have, but I haven’t bought any new items. Now, that is a little sensation considering that I’m the stereotype female when it comes to shoes and handbags.

So never say never: I eat “Saitan” and “Quorn” now, why not wear “vegan” shoes? Right now, the only thing that's holding me back is their hair-raisingly ugly design - which means I need to work on my vanity, a true effort.

What also takes a conscious effort is to avoid becoming an over-correct, newly-born Buddhist, a “convert”, a really fussy person, who makes life for everyone around her difficult, just so hers can lived the way she thinks is correct. I don’t want to accidentally wipe out all the potential merit I’d have accumulated on the one side, by giving people a hard time on the other side.

Still, as a late bloomer, I feel compelled to catch up. So for once, I’ve been anticipating Sakadawa as an opportunity to generate some revenue for my merit account. Now is supposedly the best time to accumulate it, and it doesn’t even cost me a real effort. Don’t I love Buddhism?