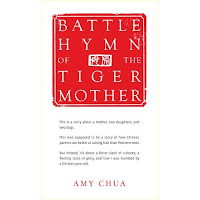 I thought I heard him shout something about “Tiger balm” from the other end of the apartment.

The imagined penetrating smell of this Chinese cure-all made me wrinkle my nose. Heaven knows what all they mix into this ointment! It’s never going to enter my four walls anyway. In my mind, Chinese medicine is by definition obscure with all kinds of weird animal ingredients – safest to stay away from it.

But actually he had said “Tiger mom”, referring to a book by American-Born-Chinese and Yale professor Amy Chua. It is stirring a huge controversy in the West because Chinese parenting is portrayed as more successful in producing disciplined, hardworking children who excel in school and succeed on the job whereas Western laissez-faire style parenting would produce lazy, spoilt kids.

I am definitely the wrong person to be asked about Chinese parenting or Chinese “anything” for that matter. I am a die-hard Tibetan. My default mode is suspicion and prejudice about all things Chinese. Over the years, I learned to put on a conciliatory, emotionally detached show for political correctness’, Buddhism’s and pragmatism’s sake, but on the inside much of me is still in aversion. So I shouted back from my end of the apartment: “I don’t want to read that crap! Chinese parenting is about turning your kid into a reckless robot! Remember xitonghua? That wraps it up in one word!”

But then my partner is a very reasonable and sometimes downright wise person. So after my initial refusal, I read the article on the BBC about the book, stopping short of his offer to buy me the book. Good grief! I don’t want to see the “tiger strategy” broken down step by step into practical implementation stages and milestones. Spare me the details. I don’t want to know how Amy Chua forced one of her daughters to play a piece on the piano for hours in a row without allowing the kid to even go to the loo. The author herself points out her approach has its limits, so why delve into nasty details?

Instead I began to wonder what distinguished “Tibetan parenting”.

Here’s my shot: Tibetan culture tends to overrate “a kind heart” (sem zangpo) to the detriment of performance and assertiveness, which then tends to produce adults who may be kind-hearted but are mediocre, indulgent, unambitious and inconspicuous in practical matters.

Chinese parents believe that they know what’s best for their kid and if the kid doesn’t agree, that it is their duty to force the kid, who will eventually realize that the parents were right and be grateful. Chinese parents believe that they weren’t doing their job if the kid didn’t achieve results no matter how. Chinese kids walk a straight line: They have to work hard to achieve good grades to make it into a good school, a good university and then on to a good job. That wraps up the life prospect of a Chinese kid.

Tibetan parents of any generation also think they know what’s best for their kids and we expect them to move in that direction, that’s also a traditional Asian thing. But my generation would never exhibit that kind of tenacity in forcing a kid. We try our best by talking reason, sometimes raising our voice but never resort to the carrot-and-stick approach. We don’t threaten and – Buddha forbid – we do not use force. 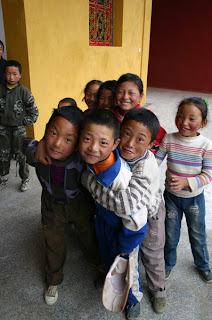 In contrast to the Chinese, we Tibetans don’t command our children because we believe we don’t “own” them. A child chooses us as parents by being born to us in this life. But the kid comes with a complete set of independent imprints on its mind from previous lives. Being the parents is a transitory thing. We have the responsibility to shape the child’s character and personality, help it get onto a good track so the kid can stand on its own two feet, but that’s about it. The rest is up to the kid and its personal karmic backpack. This is Buddhist parents thinking.

And Tibetan kids have their own unique features as well. Let me give you an example. A colleague has a really talented 12-year old daughter who is not only a top student but also a graceful ballet dancer. The mother thought maybe the girl should move to a more competitive ballet school with regular tests before a professional jury so she could make the most of her talent. After the trial lesson the mother asked her child whether she would like to transfer to this school. Now, a tiger mom would not ask for the child’s opinion to begin with. She would just transfer the kid. But we’re talking a progressive modern Tibetan mom here.

The daughter asked back: “If you were in my place, what would you do, Amala?” The mother kept insisting: “No, you first. Tell me what your thoughts are.” But the girl held back until her mother expressed her opinion. The girl then agreed with her whole-heartedly.

I call this a typical reaction for a Tibetan kid. They look to their parents for guidance. They are willing to accept our decision if it’s accompanied by reasonable explanation.

Another point that illustrates the special feature in Tibetan parenting is the way Tibetans pray. They pray for the welfare of all sentient beings. Even the poorest Tibetan in some remote corner of the highlands who owns nothing but a smelly black tent and some animals will pray this way. It reflects a mindset that stretches beyond oneself.

Chinese Tiger people have no time for such sentimentalism or for others. Their domain is the here and now with themselves at the centre of a hostile competitive environment where it’s “eat or be eaten”.

We are so very different from them. Actually we are extreme opposites.

While our religion teaches us to cherish others more than self, the Chinese belief is to prevail over others. While we literally don’t harm a fly, they virtually eat everything that creeps and crawls. What an irony that we are made to live together! It’s our national misfortune that they constitute the dominant culture.

How to survive the clash of cultures? If we don’t sharpen up more and fast, they’ll eat us alive.

We should particularly realise that our habit of leaving everything the way it is and trusting upon the law of cause and effect to take its just course, is not only a wrong understanding of karma but downright irresponsible and short-sighted: Without taking specific action, our kids risk ending up as over-emotional softies unable to achieve much in practice.

We should also watch out not to fall into the “victim mode” which leads us to externalise the blame for all our problems, big or small, on the Chinese presence in Tibet. The victim mode is poison for our motivation to make it. Or the "poor refugee" mode for those of us who live abroad. We must stop identifying ourselves as poor refugees without a country. We do have a country and our country needs us now more than ever. We must make the most of ourselves so we are able to stand by Tibet's side during these rough times.

Another weird interpretation of Buddhism à la tibétaine is that we have come to overvalue emotional development. We call it “healthy mind” or “the kind heart”. As one mother once told me, “I tell my child the most important thing in life is to be a good person. This is more important than academic performance or a high salary.”

This is a fatal misjudgment! Being sem zangpo AND striving to be a high performer are both equally important! Who wants to put up with kind-hearted people who have little knowledge? Look at how some Tibetan organizations operate: They are full of people with good intentions but precious little skills. We all know it doesn’t get us anywhere.

In our culture, Buddhism has always played a powerful role. We are not always on top of it as far as the practical part goes. Sometimes we go astray but it doesn’t mean that we don’t recognize our mistakes or that Buddhism is useless.

It is ingrained in our genes: gomspa medna byangchub mi’grub – “without practice, no enlightenment” or to say it as unsurpassably as the Westerners do: No pain, no gain; no cross, no crown; no sweet without sweat; nothing comes out of nothing. Tibetan children are perhaps better prepared than any other children to deal with hardship because of their active Buddhist upbringing. We should make use of this quality and get us all into the active habit of studying hard and aiming high. We can't change the Chinese with whom we are forced to live, but we can change ourselves.

There shouldn't be a single person out there thinking being kind-hearted is being good enough. Mind you: Compassion never comes alone. Compassion fulfills its purpose only in combination with wisdom or “skillful means” as they call it. Applying compassion without wisdom is idiotic and turns us into a nation of Lama Kunchos.

Hardly groundbreaking analysis from Mountain Phoenix here. But if we don’t act and emphasise result-orientation and discipline in our kids as equally important as developing a kind heart, they will not only be eaten alive, they almost deserve to be eaten alive - along with their silly parents.

So here’s to compassionate AND confident Tibetan kids!
Mountain Phoenix