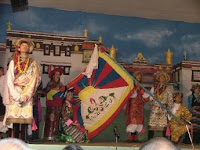 My seven-year old participated in a Tibetan function the other day. It opened with the usual pomp: Drums, flutes, traditional costumes, huge flags, and a portrait of the Dalai Lama ceremonially placed on a throne; then all function owners gather on stage and sing the Gyelu, our beautiful national anthem.

I don’t know how many of these functions I’ve sat through since my own childhood – innumerable ones. Still, I can’t recall a single occasion where the Gyelu has failed to move me. Have you ever heard a more beautiful national anthem then the one of Tibet, our beloved homeland? Here is particularly graceful rendering of our Gyelu:


So when I saw my child standing on that stage, I realised it’s time to teach my kid the national anthem. For if there is one thing a patriot MUST know, then it’s how to sing the Gyelu with dignity and grace.

Well, the great thing coming out of this first: My child can sing the anthem now, every curve of the tune, with a crystal-clear pronunciation, without a single trace of a treacherous foreign accent to be detected, nor even intonation. My kid can even play the anthem on the flute and the piano. Bravo, chapeau!

At the same time, the child hasn’t asked me too much about the meaning, for which I’m really grateful. Here’s why:

While preparing to teach my kid, I realised that all these years, I had been singing the Gyelu like a parrot, not only ignorant of its meaning, but also without feeling the urge to learn what the words actually mean. Mea maxima culpa!

When I quickly wanted to fix this embarrassing gap in education, before my child could expose my inadequacy, I searched for a translation so I could convey the meaning. Only to discover in horror that the text of our sacred anthem turns out to be - excuse my language – crap! Check out this extract from Wikipedia: 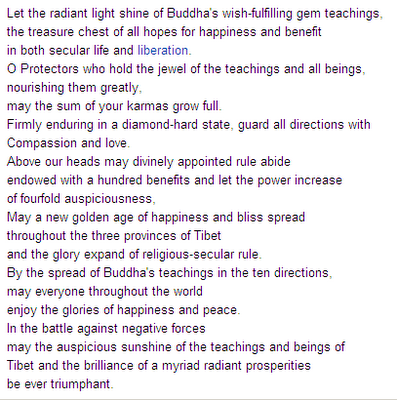 That doesn’t sound like the anthem of a country, that’s the hymn of an ideology! Our hymn glorifies Buddhism instead of Tibet. As far as I get it, the “Gye” in Gyelu stands for “country” (gyalkhab), correct? But the content makes it a “Nang-lu” - anthem of Dharma. It’s crazy. We got it all mixed up!

Reportedly some overzealous folks are propagating to have the anthem rewritten since it was texted by the late Kyabje Trijang Dorje Chang, junior tutor to His Holiness the Dalai Lama, whose reputation has become tainted due to his personal protector deity having been the these days disgraced Dorje Shugden. Well, the anthem definitely needs to be rewritten, I can’t agree more, but for another reason: It needs to be rewritten because it puts religious ideology in the place that appertains to our country. It basically claims our country is Buddhism.

The line which personally makes me the most uncomfortable is the one glorifying the antiquated system of religion-cum-politics-combined:

May a new golden age of happiness and bliss spread
throughout the three provinces of Tibet
and the glory expand of religious-secular rule.

We sing these lines on every important occasion and with all our heart. But how can we continue to praise a system that has proven to be unfit to handle the requirements of the modern world? This form of government has not served us well in the past for it was unable to interpret the signs of the times, unable to make the right decisions, unable to prevent the Chinese takeover. And it is not serving us well in the present either for the governing Lamas make our secular politicians look like little kids who constantly need to be told what to do next.

Look at the mindset our anthem reflects and then say we’re democratic. Who are we kidding? How can we even think to have democracy without secularisation?

Just for the record: I’m not criticising the Dharma, nor the composer. I just think he was the wrong person to go to for the anthem. What can you expect? Dharma is a Lama’s worldview. No wonder did we end up with the anthem we have, an anthem that mixes apples and oranges, that praises religious rule and relegates our country to the second line. But it’s not the composer’s fault, it’s ours. 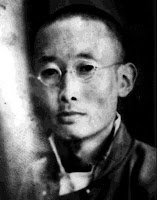 We say we are a democracy. We say religion and politics should be separated. Everyone is full of praise for the “Amdo madman” Gedun Choephel, who said about our political system: “If you mix salt and sugar, how can that possibly result in palatable food?”

But our anthem unmistakably shows us once more: We Tibetans are completely out of sync. There is a huge disconnect between what we say and how we actually tick.

Since we’re oh so engrossed with Buddhism, maybe it helps to recall the famous line from the Heart Sutra: Zug tongpa ‘o, tongpanyid zug so. We are trapped to systematically cherish the first part, “form is emptiness”, and slight the second, “emptiness is form”. We value Buddhism so much that we constantly dismiss the equal importance of the “conventional” realm.

We lost our country over this fatal prejudice, but shockingly, we still haven’t become any smarter. We still go on the old way, we still praise religion and slight the secular. We still can’t find the strength to reform our worldview and our political system. We even stole the national anthem from our country and gave it to our religion.

Buddhism is important for our identity and it rightly holds a special place in our hearts. But Tibet is just as important. We haven’t done our country justice. A first step to get back in sync is to give our country a Gyelu that is worth the name. 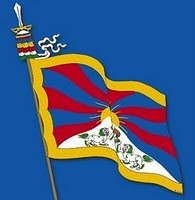