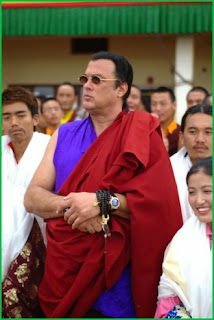 I came across an article in Tricycle Magazine about Steven Seagal visiting Russia and Chechnya to promote arms sales and hang out with shady potentates. Usually I wouldn't pay attention but when the author concluded based on Seagal's behaviour that the Tulku system was "deeply flawed" – ah, my Tibetan heart hurt!

Don't we have a hard enough time to be taken seriously by the world around us? Why must we ridicule our religion by declaring an ageing American action-movie star with an off-screen, multiple identity fad into a Tibetan Tulku? Rama Lama Ding Dong! Enough crazy wisdom! Please, can we have Tulkus who behave like normal people?

People have said there is "Tulku inflation" in the Tibetan diaspora: The number of reincarnated Buddhist masters is skyrocketing while the quality goes through the floor. Stories like these only reinforce the bad impression.

Just for the record: Tibetans believe every living creature has a mental continuum, a subtle stream of mind, which leaves the physical body after death and looks for a new body in which to be reborn. Yes, really. But while ordinary folks with untrained minds get thrown into their next existence through the force of their karma which is said to be imprinted on that subtle stream of consciousness, people with trained minds are capable of deliberately targeting their rebirth. We call the latter "Tulkus".

Ideal Tulkus are skillful surfers of the samsaric waves: They come back again and again in whatever form it takes – human, animal, formless, Deva – and for as long as it takes until the last creature is freed from the cycle of birth and rebirth. That is their Bodhisattva pledge. Their whole raison d'être is to help others make it out of cyclic existence. Moreover, Tulkus are also said to be the only form in which ordinary mortals with their meditatively unrefined senses have a chance of perceiving the presence of an enlightened being. That's how the story goes.

In reality we see all kinds of Tulkus: There are fake ones who squeeze money out of naïve followers. In Tibet these impostors are known as rgya blama ("Chinese Lama") but they probably thrive everywhere. Then we see failed Tulkus who quit their religious education and hang around being of no benefit to anyone. Another group are the dormant Tulkus who lead private lives as family people and don't act upon their vocation to teach the Dharma. Then we have Tulkus who do teach Dharma but are themselves “work in progress” and therefore not totally reliable.

Nevertheless, in principle Tibetans wholeheartedly believe in the existence of Tulkus par excellence, who are attained Buddhist masters free from mundane concerns, having overcome cyclic existence and developed boundless compassion. The most famous Tulku is of course the Dalai Lama, but there are many, many others.

Is Steven Seagal one of them?

I wish we could say the man is a gaffe to clear it up for good, but, alas, with Tulkus it's not like with the obese where anyone can see them out. With Tulkus, it's tricky because their level of attainment is invisible to the ordinary eye. Tulkus have always been discovered by Tulkus, who in return were confirmed by Tulkus – almost ad infinitum all the way back to the Buddha.

In the case of Seagal - to close what looks like the last loophole – we must concede from what is known that his recognition process appears at least formally correct. But then precisely because the reasoning cannot be tracked by normally intelligent people with normally developed senses, it opens the door for interpretation and misuse. We could be told anything, what would we know at our level of mind?

I only know Tulkus are not born perfect. It’s a long process up to enlightenment. A lot can happen on the way. That’s why Tibetans prefer to catch their Tulkus young and treat them rough. Those recognised late in life like Seagal hardly stand a chance to acquire or reactivate the knowledge and wisdom necessary to do the work of a Tulku. The title remains a nominal decoration.

If we are mainly concerned with our current existence and don't think about rebirth we can shrug the whole Tulku business off at this point. We could get rid of Tulkus altogether as has been suggested elsewhere. Most people wouldn't miss them anyway.

But once people start thinking about rebirth more, especially with regard to some of the things that are said to be going on during the process of dying, rebirth may actually become intellectually comprehensible and we may also get a glimpse of the potential vastness of existence. From then onwards, that's my guess, only a spiritually attained Tulku will do.

I'm continuing my metaphysical speculations: Let's say someone, after having listened to teachings, contemplated and meditated for years, at one point believes he experiences "Emptiness" in meditation. How can that person be sure that it is really Shunyata and not something else? A reincarnated Buddhist master will be more likely to tell and give guidance because what is required goes beyond intellectual knowledge into direct experience and insight. No one else is up to the job, not a learned monk, not a good Dharma teacher. For that it takes a full-fledged Tulku.

Sounds fantastic but that's how I imagine it must be. For people who want to put the Buddhist teaching into practice beyond leading an ethical life, into developing the mind and changing one's outlook beyond this life, a qualified Tulku who teaches the Dharma in the form of a Lama, retains an enormous importance. That’s also why Lamas, i. e. Dharma-teaching Tulkus, play such a central role in Tibetan Buddhism.

All prayers are based on generating correct faith and reliance on one’s Lama. From the basic Refuge Prayer Skyabs'gro sems bskyed which many of us learn as children and where the very first line says "I go for refuge to the Lama", all the way up to the highest tantric practices the fundament is always correct reliance upon one's spiritual guide who is considered the embodiment of the Three Jewels and the source of all one's achievements.

In his famous "The Words Of My Perfect Teacher", where 19th century Tulku Patrul Rinpoché relates to us the teaching of his precious Lama, Tulku Jigme Gyalwa'i Nyugu, he too writes: "The devotional practice of Guru Yoga is the only way to awaken within you the realization of the uncontrived natural state. No other method can bring such realization."

And to crown it all: Even the Buddhas relied on the Guru devotion method to achieve their enlightenment because their images often show another small Buddha, aka their teacher, peeping down from their heads! So when the Lama is the undisputed alpha and the omega to get anywhere on the Buddhist path, how would people continue their practice if we got rid of the Tulku system?

Each Tibetan Buddhist order has its tsogs zhing or Refuge Tree where the most important masters or “lineage Lamas” are represented. This lineage of knowledge and insight started with the Buddha and was imparted to his disciples who then handed it from one enlightened master to the next.

Technically, these are all Tulkus who ensure the authenticity of the Dharma taught. Who would populate the Refuge Trees, which serve as practitioners' inspiration, if we got rid of Tulkus?

My personal conclusion from all this is that for believers the Tulku system is too big to fail. An authentic Tulku who teaches Dharma in the form of a Lama and ensures the correct transmission of the Buddhist teaching is priceless. It must be like meeting the Buddha in person. Tabula rasa would axe the rare gems along with the junk, this much is clear.

Does that mean we just have to put up with Tulku Seagal and the likes? I don't think so. Students can do something as individuals. A practical way would be to ignore Tulkus that we perceive as inflationary. Let them run out of steam. You can't fool all the people all the time. Even more so when a Tulku falls foul with the law or our inner voice tells us there is something weird about this person. A lot of harm can also be avoided by thoroughly checking the teacher out. The whole Guru devotion part mentioned earlier doesn't set in until after having put a Lama to the acid test.

Then it is also said that Buddhas and Bodhisattvas arise according to the needs of the sentient beings; when people don't appreciate or forget the rarity and preciousness of such beings, they withdraw their physical forms. - Now this one is really clever. It could mean we get the type of Tulkus we deserve. Tulku inflation would be a reflection of society at large. It takes the external focus away from Tulkus and forces us to look inward and we would have to pose ourselves the awkward question: Are we critics any better material on our side? Have we accumulated the causes of encountering a true Lama whose words pierce marrow and bone?

For the lucky ones who found their perfect teachers and worry they may not encounter them again in their next life: Once during a Q&A a person expressed exactly this worry of not encountering her spiritual guide again in the next life and what she could do to ensure their paths would cross again. The Lama calmed her down, “Don’t worry, you don’t have to go around trying to find the Guru, the Guru will find you.”

Posted by Mountain Phoenix at 9:10 AM 2 comments: