Tibetan Dialects And Accents: Storm In A (Butter) Tea Cup 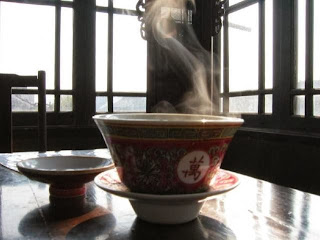 Time stood still at this fundraiser for the Tibetan Children's Village. Alumni performed one Rangzen Shonu song from the 80s after another. Then a young man who looked like a new arrival from Tibet picked up the microphone during a break and began speaking about the self-immolations. He made an ardent appeal to the audience to mobilise the government and the UN for help, urging us since we were in a safe country, to do all we could to support the people in Tibet.

That's when one of my companions, a girl from Lhasa married to a TCV alumnus, said to me in syrupy Tibetan: "I can't understand a word, he is speaking khams skad. Can you understand?"

What the young man said was not in Kham dialect at all. He made an effort to speak Ud skad, the language of Lhasa - albeit with a Kham accent but that was really it.

My companion gave me an incredulous look, "No way, that's not Ukay"!

I didn't know her that well. Was she just acting snobbish or was her Tibetan really that narrow? What we heard was Tibetan pronounced with an accent. Speaking with an accent and speaking in a dialect are two different animals. An accent is merely pronouncing regular words a bit differently. Instead of "house" pronounced khangpa for example, some say khompa and also khumpa but from the context both are still recognisable as variations of ཁང་པ་ .

A dialect on the other hand has a separate vocabulary, and sometimes also a different grammar. It becomes evident when we think of the little Tsang dialect many Tibetans know and sometimes also make fun of: Ba, ma(m)-ba? Nooks  bè! - Believe me now, Olo?

On a trip I accompanied as an interpreter I was lectured by the Chinese hosts in Toe Ngari that the locals spoke "not the same" Tibetan as in Lhasa and that it would be difficult to communicate. Amazing how the Chinese, who often spend an entire lifetime in Tibet without ever caring to speak the language, believe they must enlighten a native speaker. Tactful is different. But I noticed it is one of the things our colonisers are most fond of emphasizing: How the Tibetan language has so many varying dialects and how they are all mutually unintelligible.

The sinister intention is clear: Undermine our understanding that we are a nation united by a common tongue. Divide et impera. We got you so figured out Tonghzi, comprende?

But as irritating as they are, the Chinese have a point. Seriously: How can we say we are united when we have trouble understanding what the brother in front of our nose is saying? I hate to admit but it's basically an absurd situation with the Chinese wisenheimers annoyingly all confirmed. Therefore on our side, we cannot leave it at that.

So what can we do to improve intra-Tibetan communication and understanding?

In this respect the Tibetan-language news programmes aired by the Voice of America and the Radio Free Asia play a successful forerunner role because they are presented by speakers from a variety of backgrounds and with all kinds of accents. Whatever it is they are speaking, when we pay attention we will notice that it's based on literary Tibetan and not some "dialect". While the VOA Tibetan programme rightly doesn't make any distinction, the RFA news editions are labelled "Amkay", "Khamkay" and also "Ukay", which I find misleading.

Unlike Ukay which is a homogenous dialect spoken in and around Lhasa, Kham Tibetan or Khamkay feels more like an umbrella term. A whole range of dialects, sub-dialects and sub-subdialects are grouped under it almost in an infinite sequence. So we really can't speak of one Kham dialect spoken by all Dotoe people. Similarly there can be no single grand Amdo dialect either because a native of southern Amdo such as Ngaba speaks different Amkay from a person up north in say Labrang.

So if the news were really aired in a dialect, it would not only be difficult to reach large segments of the population but it would also put the makers of the programme in the politically sensitive situation of having to select one dialect over another. All this can be avoided by using the written language as the basis. And actually that's also exactly what is practiced by RFA Tibetan programme: Their speakers have regional accents but for sure none presents the news in a dialect. Therefore having separate editions such as "Amkay" and "Khamkay" really doesn't make sense: There is no value in differentiating Tibetan according to accents.

Furthermore, it could confuse people and create artificial barriers because Ukay speakers like my acquaintance may not listen to those programmes thinking they are in a "dialect". So there shouldn't be any distinction at all. Everyone should be encouraged to listen to all editions indiscriminately. It will help us understand better the morphology of our tongue and improve our listening skills.

Amidst this linguistic mixture one of my eastern Tibetan buddies said to my utter surprise that we should just all speak Ukay, it would make communication easier. ­- I am not convinced. Having everyone speak uniformed Lhasan would be culturally impoverishing. It would be like all Anglophones the world over would be expected to speak British English. Where is the local flavor? We are not amused :--)

To push Lhasan as the standard may have been acceptable during the early years of exile when the institutions were dominated by the same crowd who was already in charge in Lhasa. I hear in those days it was common that Dokham folks would have their pronunciation scorned upon or "corrected". But these days with the social demographics in exile tilting towards Easterners pushing Lhasan too hard can become problematic.

When we get down to the linguistics, Ukay is another Tibetan dialect, no more, no less. Expecting everyone to sound like a person from the capital is not only unnatural or culturally impoverishing; if we truly believe in the premise of the equality of the Cholkhas, Lhasan superiority is simply unacceptable. We must meet somewhere in the middle and the effort should be equal for all. This is my opinion.

So the solution to improving intra-Tibetan communication and understanding and reinforcing our common linguistic heritage cannot be to level out dialects or try to eradicate accents. What would really help is to raise the level of education in literary Tibetan so it does not fall behind the vernacular; and we need to increase exposure to all kinds of accents and dialects because the more variations we hear, the smarter we get at recognising the similarities.

The way I see it, fundamentally the Tibetan language situation is diglossia, a special form of bilingualism. While traditional bilingualism describes the simultaneity of two complete languages fit to function for all purposes, diglossia describes the simultaneity of two mutually complementing forms of one language each of which performs a specified function which the other lacks.

In the Tibetan case, diglossia neatly describes the co-existence of oral dialects with the literary language. We have the clear distinction typical of diglossia: Dialect is used in the homes; it's private and related to one's hometown; that's what we speak with our buddies aka phayul jigpa. The literary language by contrast, is used at work and in school; it's public and related to the national level. We use this type of Tibetan when dealing with authorities, in the media or when speaking to Tibetans from other areas.

In public, Dokham folks generally make an effort to sound more Ukay where the pronunciation is closer to the written language. What the lad at the TCV fundraiser did was exactly that. There is this functional specialization of the Tibetan language which is typical for diglossia. No Tibetan would speak dialect in public unless he's a complete country bumpkin who has never left his valley and as a result never had interactions with other Tibetan speakers.

In practice it may be difficult to recognise Tibet's diglossia. Literacy rates are low one reason being that written Tibetan must compete with Mandarin pushed as the standard language by the Chinese state at regular intervals. The result is that we have Tibetan dialect speakers who revert to Chinese instead of literary Tibetan when communicating with Tibetans from other areas.

Nevertheless, we should not misjudge the issue based on the distortion resulting from the spread of Mandarin. Treating the Tibetan language situation fundamentally as one of diglossia has helped me better understand the nature of our linguistic challenge. Consciously acknowledging Tibet's diglossia can help us concentrate on the content of what's being said rather than getting distracted by the form how it's being said. We will clearly recognise the common ground, the literary language, and not be confused by things that set us apart - a dialect, an accent or a funny intonation. As a result, our idea of the Tibetan language becomes democratic and egalitarian because we apply ourselves to respect it in all its dialectical and accentuated variations.

Looking at the Tibetan language situation as diglossia may also give us a perspective because we realise we are not the only people who face the challenge of a diverging written and spoken language: There is diglossia in many places. Take South Tyrol as an example, which the Dalai Lama visited earlier this year: Locals speak a German dialect but switch to High German when speaking to people from outside the region. In addition, South Tyrolians must also learn Italian as the official language – just like Tibetans have to learn Chinese.

Treating our language situation as diglossia, improving our written Tibetan and become better listeners could also help take Tibetan to the next level above mere sustenance, so the language is fit for the requirements of the time and we don't easily succumb to the dominant language be that Chinese, English or another tongue.

Not understanding another speaker of Tibetan probably happens all the time. If we leave it at that however and don't make an effort to change it, we also inadvertently reinforce the Chinese perception of the Tibetan language: That it's so diverse that it's mutually unintelligible. If that's what they believe let them, dilettantes. But we should know better. We mustn't fall for what in essence is a storm in a tea cup: All Tibetans share the same written language. Not understanding one another is ridiculous. These are things we have in our hands. Not doing anything would be negligent.

Related Essays
A Private Conversation About The Recent Tibetan Language Protests In Tibet
Reading Tibetan? All Greek To Me!

Posted by Mountain Phoenix at 9:31 AM 4 comments: