I appreciate High Peaks Pure Earth because it brings significant developments in Tibet and China to our attention. Recently, it discussed songs about Tibetan unity: “Mentally return” and “Song of unity” to which I would like to add some comment.

When I heard the song “Mentally return” for the first time about two years ago, the few fragments I believed I understood were enough to knock me off my feet. What an immortal declaration of love to our homeland, the gracious land of snows! A hunt for the music and the lyrics began which only ended in the Barkhor last summer, when I finally managed to buy a VCD of the 2007 Rebkong open-air concert which featured “Mentally return”. 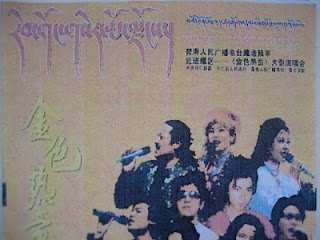 In case the VCD is still on sale, people should make sure they buy plenty of copies. The disk quality is so poor that after watching it a second time, it would just stop every other second and not move for the longest time.

Did you also marvel at the large audience? I do hope people showed up out of free will and attendance wasn’t orchestrated. I rejoiced inside over so many “rugged-faced” folks of all ages participating peacefully in what was not only a visibly big entertainment event, but also a gigantic exercise in reaffirming collective identity. Moreover, the whole concert was moderated exclusively in Tibetan. That was encouraging when we recall that even cultural events often have bilingual moderation at best.

After the 2008 unrests, I wonder how long it will take before such large gatherings will be allowed again. We hear the organizers of the pompous, bi- or tri-annual Kangba Yishu Jie (“Khampa Arts Festival”) were looking all over the place for a “safe” location to stage this year’s event, but low profile. As a last resort, they settled for the rebaptised “Shangri-la” Tibetan Prefecture of Dechen in Yunnan. I have always wondered whether the Tibetans really find it entertaining to look at people in plump jewellery and machos in stone-age felt outfits parading through the streets with archaic daggers hanging from their belts. Or is this a top-down ordered marketing event aimed primarily at tourists? Let’s see how it goes. The festival is still going on as I am writing.

But to come back to “Mentally return”, I see it standing in the tradition of inward-looking, identity-strengthening songs that are also lyrically discerning like Tso Ngonpo by Dadon or more recent songs by Kunga. If we think about it, even songs from the old Tibetan era are the symbolic, poetic type. For instance the 6th Dalai Lama’s TrungTrung Karmo or Makyé Amé. They are equally about something which is important to the composer's heart, but which can’t be openly expressed because it would cause trouble.

These days, some artists pick old songs and modify them, but still stick to the symbolic, indirect style: There is a popular Amdo remix of the Dalai Lama’s Trungtrung Karmo. It’s sung in the form of a dialogue between a person and a migratory bird. Obviously, the only reason for the dialogue is the underlying circumstance that the person is separated from its kin by a third party and can’t interact freely. Still the remake is not a sad song at all, but a cheerful one. In this language of symbolism and vagueness this could – or could not – mean: Even though you suppress us, we will not allow you to spoil our mood. Check it out:


I heard Sherten’s “Song of unity” for the first time on High Peaks Pure Earth. It’s a soft and pretty song. The words on the other hand, are unmistakably direct. Certainly it is brave to be so direct, but is it also wise, I wonder. That road is confrontation and could lead directly to trouble and prison. Is our cause served by that? I am not sure.

The words are bold, yet the meaning is not clear. What is meant when the Tibetans of three historical provinces are asked to “unite”? Work to become one administrative unit but still under China? Work to become separate from China? “Unite” meaning do what?

Moreover, the phrase “unite” (dogtsa jigdril) is an over-used panacea applied to all our political problems. Often it is also interpreted to mean “Don’t talk back, just do as you're told”. I felt uneasy when I heard Sherten call “unite, unite” throughout the song.

I know it’s a traditional music style. But I find excessive goat-like singing with “baa baa” over every vowel at the end of a line un-cool. Just makes the sound very folksy and “Country-music”. That’s just my individual taste though, ignore it. Sherten is undisputedly a rising star and currently dominates the charts also in our corner of the highlands, with every place playing his music. Everybody here, boy and girl alike, loves his music without ifs and buts.

Still I fully agree with High Peak Pure Earth’s assessment that “Mentally return” is the more powerful of the two songs. The only thing is the English rendering of the title. It sounds odd. I would have translated it more freely as “Many happy returns” or something to that effect.

Do you have good sites to recommend? I sometimes go to "Tibet Music Net" and “China Tibetans Music & Entertainment Portal” which friends recommended. You'll find the latest songs from the music scene in Tibet there. Not that I understand much, I just randomly click around for a taste.

It looks like music has become a flexible channel to emphasise collective identity. That’s good news. What I find even more impressive is that many composers and performers don't compromise and pay equal attention to artistically good songs.

In 2007, another album with subtle “Tibetan power” songs was published in Lhasa. The title is Lhämè kyi tsesog – “the stainless life” and features 16 songs performed by less-well and better known artists including Zimi 9pa, Kunga, Yadong, Jamyang Kyi, and also Sherten. 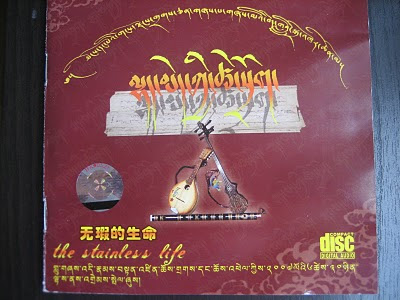 Check out track no. 5 Sem ü kyi dunpa which I would freely translate as "Prayer from the bottom of my heart". It's performed by singer Norsang in the picture below. Lyrics are by Tenzin Chodak and the tune by Lhakpa. The singing style is reminiscent of Sherten but the accent is closer to high Tibetan, so a translation may not be necessary: 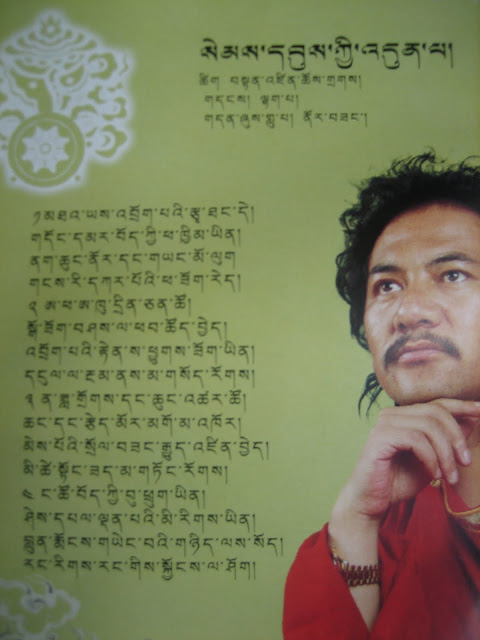 I'm still struggling to get the audio on the blog. Once it's there, listen close: You'll love the ending line where he says rang rig rang-gi kyongla sho. In these rough times, may we find the strength to save ourselves.

Posted by Mountain Phoenix at 7:15 AM 9 comments: